Our long anticipated and much rehearsed Phantom of the Opera package finally made its debut on 10 and 11th September 2011 at the Nelson School of Music.

Nelson Bays Harmony Chorus was invited to feature during the Nelson City Brass annual “Last Night of the Proms” concert.

Traditionally a series of concerts in London, in Nelson there are just two concerts each year.  The concerts combine traditional ‘Last Night of the Proms’ music and audience participation with non traditional musical features including our four songs from the musical Phantom of the Opera –  Music of the Night, Wishing You Were Somehow Here Again, All I Ask of You, a duet sung by young Nelson barbershoppers, Jesse Edwards and Nick Johnson and Phantom of the Opera.

Pictured here, the chorus is singing Phantom of the Opera complete with golden masks and directed by, Kathy Jamieson. Kathy has recently moved into a directing role after gaining a wealth of  experience in the Greater Auckland Chorus, as tenor in the award winning quartet Hot Ash and more recently in  the Nelson quartet OffBeat and as tenor section leader in the Nelson Bays Harmony Chorus.

Click here to listen and watch Wishing You Were Somehow Here Again directed by Janet Rowland. 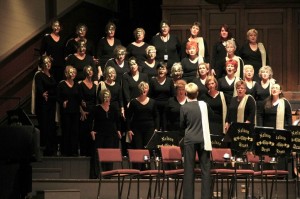