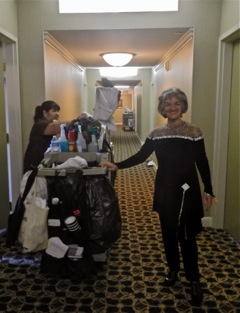 Nelson Bays Harmony Chorus member Lois Brookes recently returned from competing with the Christchurch City Chorus at the Sweet Adelines International Convention in Houston, Texas. Here are some highlights from her trip

In the last 10 days before departing from NZ, we had 37 hours of tuition including two concerts!

We had two costumes, one for the semi final and a second in anticipation of reaching the finals i.e. in the top 10 out of 33 competing choruses. Quite a bag full – especially since we were required to take our costumes as hand luggage – just in case.

Once we arrived in Houston, Darlene Rodgers and Lea Beverly, both sometime coaches of Nelson Bays Harmony, coached us on each of the 6 days prior to the competition for between four to six hours each day. Our rehearsal on the International risers was exciting; several other directors came to hear us there. All the rehearsals meant I only got to browse the Harmony Bazaar to shop for souvenirs for a few minutes.

Our final makeup check involved the whole chorus lining up so our foundation make up was the same. Our eye colours were checked and often required more to be applied. We received very good comments about our grooming and makeup on the score sheets. 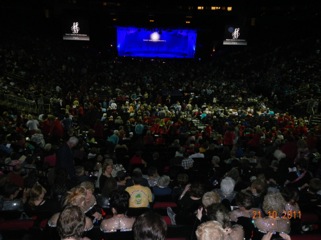 We also performed in two more concerts in Houston. One was hosted by the Houston Chorus and featured the eventual 2nd place chorus, Rönninge Show, as well as previous quartet winners, Salt. Several hundred people packed the venue and Christchurch’s own ‘Aftershock’ quartet also did us proud.

Christchurch’s earthquakes over the previous year certainly increased interest in the chorus.

Our supporters’ team of husbands, partners and keen family members, dressed in specially designed T shirts, took a load off the chorus; sorting out the risers, organising lunch boxes, tending the sick and generally being ‘gophers’. They even sorted the rugby final for us – at 3am, after much head scratching and technological wizardry by our men, many of us crammed into a small hotel room with drinks and nibbles and in night attire to watch the World Cup final between France and the All Blacks.

The semi final competition was a fantastic experience; we were so focused it was hard to remember anything specific about the performance. Afterwards, our men had a rose for each of us and it was lovely to be applauded as we journeyed up to our seats through the crowd to the back of the auditorium. The auditorium was enormous!!!

We placed 11th in the semi finals, just missing out on a place in the finals but ensuring another appearance; this time in our green costumes, as mike testers at the beginning of the finals. We had prepared a 13 minute final ‘package’ which became our mike tester package.

Being mike testers was more relaxed and I remember having a lot of fun throughout the performance.

Two chorus dinners after each performance were a wonderful way to finish.