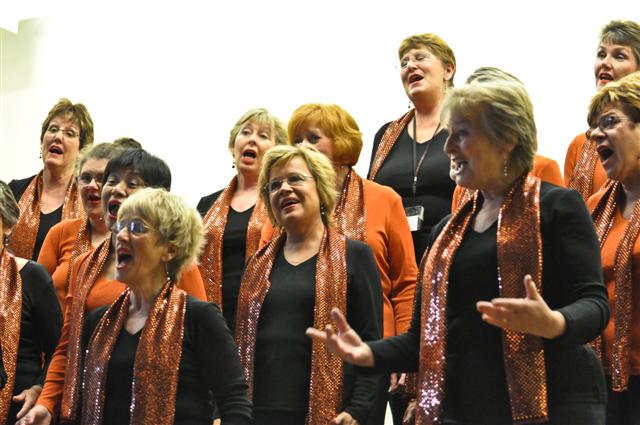 The event featured about 50 singers in five Barbershop groups. The Sweet Adeline’s group that is Nelson Bays Harmony Chorus at 30 odd was by far the largest.

Director Janet Rowland led her women through a diverse range of songs such as Peggy March’s 1963 song I will Follow Him, and in the second half The Phantom of the Opera.

It was a glittering evening. The costumes for five groups were uniform, polished and professional. The Nelson Chorus has sequinned sashes and added gold half-masks for the Phantom bracket.

Sweet Adeline’s is the traditional feminine version of a cappella, meaning unaccompanied vocal music. It was originally American, formed in 1945 to provide an outlet for women barbershop quartets and choruses.

The hidden talent is the redirection of popular music scores into 2 – 4 part vocal harmony, combined with the skill of the directors.

Four women from this large Nelson group, called Off-beat performed a set of swing, beat and pop songs from Elvis Presley and the Beach Boys.

The stars of the evening were Even Time quartet, from Wellington. Even Time have won the New Zealand barbershop competitions five times, and twice been in the top20 women’s barbershop quartets in the world. 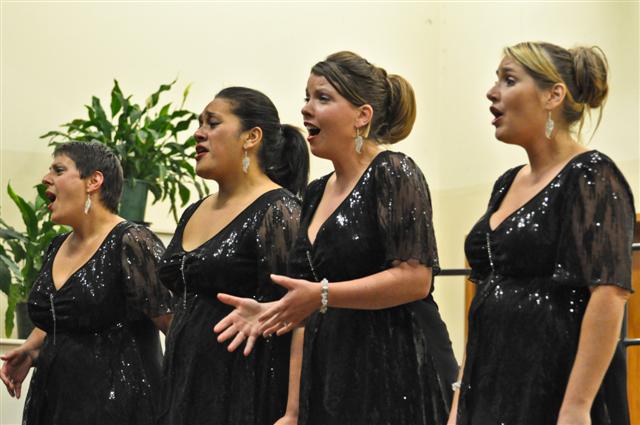 They have been together for close to 10 years and practise more than four hours a week. All the performances were good, but the difference these women made was impressive.

They are each strong singers in their own right. Henrietta’s bass vocals really shone whenever she performed a solo. Their tight harmonics expanding and combining flawlessly earned them the loudest applause from the audience.

The performers are heading out to Teapot Valley again for Nelson’s annual vocals workshop weekend. The harmonies there will be great, but they only had enough charming, brightly iced tea cakes for halftime last night.