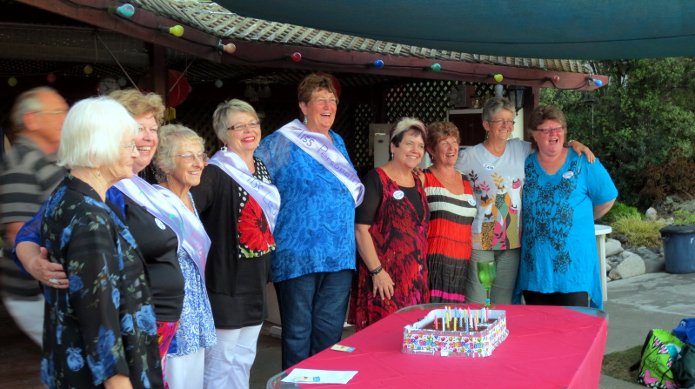 Twenty years ago an advert appeared in the Nelson Evening Mail inviting women who enjoy singing in harmony to come to a meeting on Sunday, March 14.

About 30 women turned up and were entertained by the “Sounds of Picton” Sweet Adelines chorus (now disbanded) who then broke into sections with each woman attending the meeting joining them to learn to sing barbershop.

All but a couple had never sung this kind of music before but by the end of the afternoon we had a musical director and a dozen women who wanted to go further.

Thus began Nelson City Chorus.  As members joined from further afield – a good contingent coming from Motueka and its environs – the name was changed to Nelson Bays Harmony Chorus to reflect the province-wide membership.

Of the original dozen, four are still active members of the chorus, which currently has about 40 members.

Saturday March 9, 2013 saw the present chorus gather with a number of previous members in the garden of one of them, a fabulous entertaining area surrounding a swimming pool. Invitations included “bring your togs” and many of the 60 people gathered to celebrate this milestone cooled off in the hot Nelson afternoon sun.

A sumptuous pot-luck meal was followed by short speeches acknowledging founder members who had left the Chorus (though not necessarily left Sweet Adelines), those who are no longer with us, and messages from RMT and members who could not attend the party. Two former directors were among the 60-strong party-goers.

Entertainment was provided by various small groups – some quartets coming out of retirement for the occasion – and by the present chorus.

Finally, as night fell and the stars came out, we circled the pool and sang together. As one former member put it: “I didn’t realise how much I knew until I started to sing and it all came back.” It was a magical end to the evening.

It was wonderful to catch up on old friendships and our newer members  were able to eavesdrop on the “do you remember …” moments. We especially appreciate those who came from out of town to share in the party.

Look out for us in September 2015 when we celebrate 20 years since chartering.