The event involved several hundred women from around NZ, singing in quartets and choruses and being judged by an international panel of women trained and qualified to adjudicate in this highly challenging art form.

Nelson Bays Harmony chose to enter the newly introduced entertainment division at the contest. This called for a ten minute themed package of songs and MC material which allowed creativity and humour, for which this chorus is well known, to be scored alongside the usual vocal and performance skills. It also allowed the chorus to incorporate some of their favourite repertoire songs: Mamma Mia, Blue Skies, Somewhere Over the Rainbow, and For The Longest Time.

With the use of clever props and MC work the chorus went whale watching – and the audience went right along with them! It was a great performance by Nelson Bays Harmony which scored well and reflected many weeks of hard work by this talented team. The performance was given the Audience Choice Award, which was one of the goals aimed for by the group as part of this year’s “Road to Contest” preparations.

Nelson Bays Harmony rehearse weekly and currently have vacancies in all four voice parts, in particular the lowest (bass) and highest (tenor) parts. Sweet Adelines has a focus on vocal training and Nelson Bays Harmony will be holding another singing workshop in the near future. For more information, and to find out where you might catch a glimpse of the Whale Tale, get in touch » 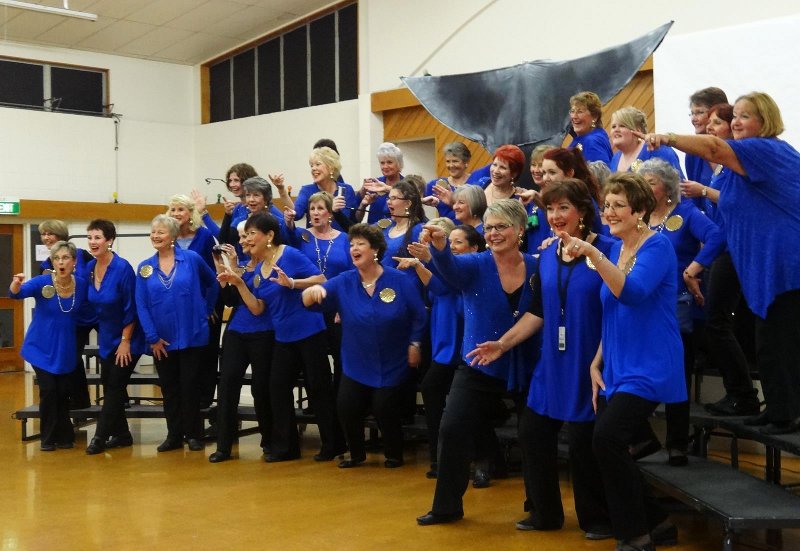