Nelson Bays Harmony Chorus was formed in 1993 by an enthusiastic group of women who loved the different sound of barbershop harmony.

Several of these founding members still sing with the chorus, which now has almost 50 members from across the Nelson region – women from all age groups and from all walks of life. We share a love of singing and have a lot of fun learning and improving our craft.

We perform for community and private events and occasionally put on shows and concerts. We run singing courses and as part of our commitment to sing and perform with excellence we regularly compete at the national women’s barbershop competition, hosted by Sweet Adelines NZ.

Barbershop singing was originally a male dominated craft born in the southern States of USA, but now approximately 30,000 women belong to barbershop choruses around the world, under the guidance of Sweet Adelines International.

Nelson Bays Harmony is one of 16 choruses in NZ who are affiliated with Sweet Adelines, an organisation dedicated to vocal training and education in the barbershop craft. This is a wonderful network and a vast resource for sheet music, vocal training material and world class vocal coaches. 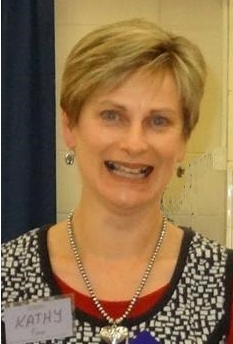 Kathy discovered Sweet Adelines in 1997 and fell in love with those barbershop chords as a member of Faultline Chorus in Lower Hutt. They moved to Auckland soon after and it wasn’t until 2001 that she went looking for barbershop again and found Greater Auckland Chorus. “What a ride it’s been since then – I have learned so much and certainly never thought I would travel to the United States to represent New Zealand!”

Kathy appreciates the tremendous opportunities for personal and musical growth within Sweet Adelines. For her this has so far included singing in four international contests (as a member of Greater Auckland and more recently as a dual member of Wellington City Chorus) and as tenor in three competing quartets (Hot Ash 2002–2007, Escapade 2009, and Offbeat 2011–2014).

“This barbershop habit is now a very important part of my life”.

In 2006 we moved to Nelson and I joined this wonderful Chorus, Nelson Bays Harmony. I stepped from the risers into the directing role in 2015, and I have now had the privilege of directing these dedicated women for the last six years. The experience has been hugely rewarding, and I have received a tremendous amount of music and leadership training through the Sweet Adelines organisation. Health issues have caused me to make the difficult decision to step down from the role and return to the risers as at July 2021, and the Chorus is now looking for their next musical leader. I hope with all my heart that someone with natural musicality, a love of performing, and strong leadership skills will take up the challenge, and enable the Chorus to reach even bigger goals in the future.